Reasons for and effects of a digital detox among digital natives

What are the motives of young people to do a Digital Detox and what are the effects? Patricia Brüggemeier researched this question in her bachelor thesis at the University of Bremen and discovered some exciting points. Our Digital Detoxing team took a closer look at this research and wants to share Patricia’s findings with you.

"Through the interviews, which I conducted with the greatest possible openness in order to capture the personal views of the interviewees as comprehensively as possible on the phenomenon of Digital Detox, this also resulted in very comprehensive detailed material."
Patricia Brüggemeier Communication and media scientist

First, who or what is a digital native?

What have been the reasons for a digital detox?

Other reasons have been mentioned, so also the desire for more concentration plays an important role (8%), senselessness (5%), self-protection (5%), change of values (1%), and the naming of concrete triggers (6%) were also mentioned. The desire was always to strengthen one’s perception of the outside world, achieve a better sense of self, and increase one’s own productivity in the process.

What were the effects on digital natives after they had done a Digital Detox?

Participants in a Digital Detox were able to identify the following positive results in the aftermath:

However, the negative findings must be presented as well:

In summary, all participants had a positive feeling after the Digital Detox. The positive effects exceeded the negative effects. This study clearly shows that Digital Detox is not about giving up, rather it is about a healthy approach to the Internet. Use the Internet (almost unavoidable in the working world) and don’t let the Internet and its algorithms use you (loss of time and control on social media). 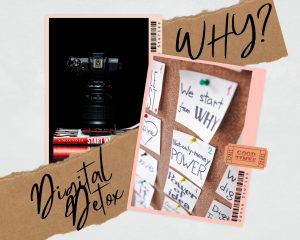 We use cookies on our website to give you the most relevant experience by remembering your preferences and repeat visits. By clicking “Yes, of course”, you consent to the use of ALL the cookies.
Do not sell my personal information.
Cookie settingsYes, of course
Manage consent

This website uses cookies to improve your experience while you navigate through the website. Out of these, the cookies that are categorized as necessary are stored on your browser as they are essential for the working of basic functionalities of the website. We also use third-party cookies that help us analyze and understand how you use this website. These cookies will be stored in your browser only with your consent. You also have the option to opt-out of these cookies. But opting out of some of these cookies may affect your browsing experience.
SAVE & ACCEPT